At the beginning of January, the Austrian Lotteries (ÖLG) started the nationwide rollout of 3,000 new gaming terminals. The Austrian Lotteries are investing more than 10 million euros in this project, which was launched in 2017. As the previous generation of terminals would reach the end of their life cycle in the next few years, the worldwide tendering process began. 13 manufacturers of lottery game terminals were invited. In the end, KEBA once again prevailed with its offer, a fact that the CEO of the Austrian Lotteries, Director General Bettina Glatz-Kremsner, is very pleased about. "We did not make the choice easy for ourselves and we are happy to continue our cooperation with KEBA. We have appreciated this high quality for approximately 20 years, we have always been satisfied and are convinced that we have made the best choice. In addition, we are pleased to be able to stimulate the Austrian economy with our decision" .

Board Director Martin Škopek adds: "At Austrian Lotteries, we have always been committed to offering technology of the highest standard. With this large investment we support our sales partners in the best possible way."

After US-American terminals were used in the early 1990s in the early days of online gaming operations, the second and third terminal generations were already KEBA devices and thus Austrian products. A cooperation that is also highly appreciated at KEBA: "We are pleased that the Austrian Lotteries have once again placed their trust in us. A trust that is not only based on the long-standing business relationship, but also on the reliability and quality of our products," says Gerhard Luftensteiner, Chairman of the Management Board of KEBA AG.

Installation of more than 100 new terminals per week

After a development phase of about one and a half years, trial operation of the new KeWin multimedia terminals began in May 2019, and at the end of November, the nationwide installation of the devices in the retail outlets. On average, more than 100 terminals are now installed each week throughout Austria. It is planned that the equipment will be completed by mid-June this year. All the 3,000 retail outlets that are still working with the terminal from 2007 will be included. The other approximately 2,000 points of sale use their KEBA KeWin micro terminals installed in 2013.

The new terminal brings advantages for the points of sale on the one hand, since it is now possible to log into the system via fingerprint and better information can be provided to customers via a larger screen, and on the other hand, for the customers, since the screen is now designed as a touch screen and is therefore fit for future new games requiring such a function.

Further information on the Austrian Lotteries can be found at www.lotterien.at 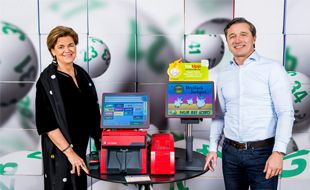 Austrian Lotteries CEO Bettina Glatz-Kremsner and Board Director Martin Škopek with the new terminal from KEBA.