The Austrian company's fourth location is in Jinan.

For approximately 13 years, KEBA Industrieautomation has been under way successfully in China with its control solutions for machines and robots. Now KEBA is expanding its presence with another location in China.

The Austrian company's fourth location is in Jinan. In the middle between Shanghai and Beijing, Jinan is a significant production base for Chinese mechanical engineering and thus a strategically important region for KEBA. In addition to Jinan, KEBA is represented by its own branch offices in Ningbo, Guangzhou and Shanghai.

KEBA is a well-respected brand in China. Meanwhile, more than 60 employees represent KEBA Industrieautomation in China. In close cooperation with the Linz headquarters, customer-specific applications are created, start-ups performed and support of customers is ensured.

“In China, KEBA stands for quality and innovation”, according to Gerhard Luftensteiner, CEO of KEBA. “Asian customers also value close proximity and expertise in their industries, something that KEBA guarantees with its own branch offices in these areas”.

In addition to machine manufacturers, the Chinese robotics market has also become increasingly important for KEBA. In robotics, China is the market that will grow the most in the years to come, aside from the USA, Germany and Japan.

KEBA has also been represented successfully in China for more than 15 years with its second business line - bank automation - and it has established a strong brand for self-service ATMs.
With the 2007 founding of the CBPM-KEBA joint venture headquartered in Beijing, KEBA expanded its position on the Chinese bank market even further. CBPM is a subsidiary of the Chinese Central Bank and the largest banknote printing company in the world. The linking of the the two companies’ expertise makes CBPM-KEBA the leading provider of cash in and cash cycle solutions in China. Currently, the joint venture employs approximately 700 people. 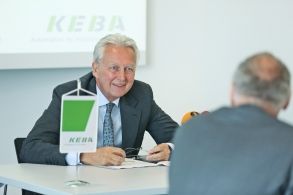